I was so pleased when they invited back to the Expresso Morning Show, once again to talk about a topic near and dear to my heart – Perfectionism. I am a recovered Perfectionist,  and still working on so many layers of awareness where this is concerned. I thought anger was my problem but once I started […]

So many times I receive messages from people telling me my that this message, post, quote was meant for them and that they needed to see and hear it at that moment. They thank me profusely and wish me only more success for the service I provide.

I am now launching official Inspirational Message Service on WhatsApp from January 2020.

Just change the quantity to 6 at checkout and make the payment.

Move towards a ‘happy confident you’! 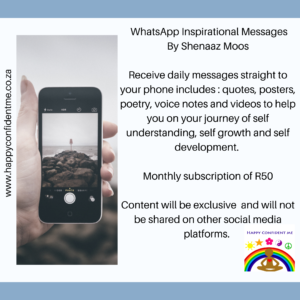 Last week Tuesday 15 October 2019, I made my third appearance on the vibrant and dynamic Expresso Show on SABC3. Our topic this time was my one of  favourite’s The Five Languages by Gary Chapman. We discussed what the languages are and how to speak them. We also mentioned how easily we can lose opportunities […]

The Five Love Languages Workshop Presented by Shenaaz Moos, Registered Counsellor We all lead busy lives and want more time, fun, love and laughter in it. Unfortunately these require effort and most of us want a quick fix, instant connection and happiness. There are some cheats and short cuts and I am excited and eager […]

WHAT YOU MISSED ON MY SOCIAL MEDIA IN JANUARY 2019?

WHAT YOU MISSED ON MY SOCIAL MEDIA IN JANUARY 2019?

I realised that many people do not have time, patience or the energy to bother reading my daily inspirations, motivations and more that I post on FaceBook, Instagram or Linkedin. So I am posting almost all January’s content in a blog version. Let me know if you enjoyed it, found it useful or any other feedback. I may not continue if its just duplication or annoying, you decide.

“Why do we want a happy ending? How about a happy existence? A happy process? We’re all in process constantly. _ Jennifer Aniston

Looking for a happy ending means always waiting and wanting. Mindfulness has taught me the beauty of the present moment. You need to do a lot of inner work to truly grasp that the happiness you seek lies in each moment as it is. I didn’t lose the weight I wanted in 2018, yet I am not unhappy. I did not run all the workshops as planned, yet I do not feel like a failure. I choose to be happy because I am alive, walking, talking and can see the beauty and wonder in nature. It’s enough to uplift any low spirits and transform any ordinary moment to an extraordinary one! All it requires is for you to choose happiness!

END_OF_DOCUMENT_TOKEN_TO_BE_REPLACED

I am finally kicking off the boundary workshop for 2019!

It’s taken me 2 years to do this… I’m doing this because I don’t want you to take 2 years to decide whether you want to change your unhealthy boundaries into healthy ones.

At the end of the day, the way you communicate and negotiate for you want, and prioritize your needs and emotions above others, only then will you truly be content.

So join me, as we journey into the world of creating safe and healthy boundaries for you.

What you will take away:

I look forward to meeting you there.

Why women like to have their boundaries crossed regularly – especially when it comes to the mother in-law.

I started my counselling career in 2012 and up to this day, I still see men and women alike who have their personal and emotional boundaries crossed regularly.

I want to relate the story of one such person, Somaya (not her real name).

Somaya came to see me for marriage counselling as she had an ongoing conflict with her husband over his mother.

Her mother-in-law lived on their property but in a separate house and behaved like everything which belonged to her son was also hers. Somaya was so frustrated and angry because she was a strong independent businesswoman who was assertive and had strong boundaries with everyone else except her husband and mother-in-law.

It was negatively impacting her self-esteem and parenting. She loved her husband and didn’t want to disrespect his mother, but she struggled with herself when her mother-in-law would enter their home without permission and would scratch around their house.

I gently pointed out to Somaya that her physical boundary was being violated. With counselling, she started to lock the kitchen door to indicate where her space began, and her mother in law’s ended.

We also tackled the construction of emotional boundaries as Somaya was constantly told she was oversensitive or difficult. She slowly realised she had deep empathy and generosity that was being exploited by some family members. She took care to set and enforce healthier boundaries and now realises these were people’s opinions of her and not her truth.

We can all relate to Somaya in some way or the other. For some of us, we struggle with setting our boundaries in our workplaces, some with our family and then there are others with our friends.

So why is boundary violation a common issue? Why do we NOT enforce or uphold our boundaries?

It’s so important that you do not feel guilty if your boundaries are being violated because it’s not your fault. Nobody teaches you this stuff so of course, you don’t know it!

Awareness is the first step in establishing and enforcing your boundaries. That’s why I decided to host a workshop that discusses boundaries more in-depth. We will also be looking at how to enforce healthy boundaries without fear and guilt.

Establishing healthy boundaries and enforcing them builds self-worth and confidence.

I want to help you on this journey so that you can live a happier life.

Last week Wednesday 7 August 2019,  I had the absolute pleasure of being a guest on the Expresso Morning show on SABC3. We discussed Sibling Rivalry. There were many issues raised, questions asked and answered. Some examples include:

Take a look to see what the answers were. Leave a comment if you enjoyed it or any questions if you have any.

THE PATH TO HAPPINESS

THE PATH TO HAPPINESS

How do know when you are happy? Is happiness a destination? Can you be happy alone?  The answers are easy, complex and confusing all at once. Happiness is unique and specific to each person and cannot be compared and defined. You do not arrive at happiness but choose it daily in a moment to moment basis. Happiness is also not dependant on any other people but is available to everyone whether you are in a relationship or not. Working on yourself, your inner demons, identifying your unmet needs of your inner child is how you attain the true authentic happiness.